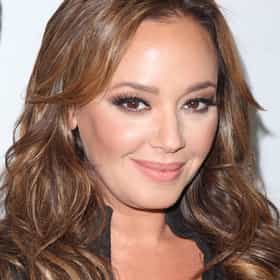 Leah Marie Remini (born June 15, 1970) is an American actress, author, former Scientologist, and Scientology critic. She starred as Carrie Heffernan on the long-running CBS comedy series The King of Queens (1998–2007) and later co-hosted The Talk in 2010–11. Since 2016, she has co-produced and hosted the Emmy Award–winning A&E documentary series Leah Remini: Scientology and the Aftermath. Raised as a member of the Church of Scientology from childhood, Remini left the organization in 2013 and began public criticism of Scientology. Two years later, she released Troublemaker: Surviving Hollywood and Scientology, her memoir about her experience with Scientology and reasons for leaving ... more on Wikipedia

17 Of The Most WTF Things Leah Remini Has Revealed About Scientology 5.8M views Leah Remini has made it her mission to expose what she sees as the dangers, hypocrisy, absurdity, and cruelty of Scientology...

Leah Remini is ranked on...

#85 of 470 Famous Women You'd Want to Have a Beer With 769.2k VOTES If given the opportunity to sit down for a beer with any famous female figure, which famous women would you most want to get...
#352 of 1,582 People who voted for Leah Remini... People in the Northeast are 2x more likely to vote for this The Most Beautiful Women in the World 5.7M VOTES Naming the most beautiful women in the world is a difficult task because of how subjective it is. Beauty is a mixture of phy...
#358 of 3,139 The Most Beautiful Celebrities Of Our Time 6.3M VOTES This list of hot celebrities is ranked by pop culture junkies worldwide, making it the best place to find the most attractiv...
#101 of 114 The Greatest '80s Teen Stars 231.6k VOTES The greatest teen stars of the '80s are well-remembered on this countdown. They were everywhere; they ruled the box office;&...
#25 of 56 The Best Female Talk Show Hosts on TV 1.5k VOTES Though the field is expanding, most of the best female talk show hosts are the faces we see and the voices we hear on mornin...
#1 of 81 Celebrities Who Made The Biggest Cultural Impact In 2017 5.7k VOTES The celebrities who influenced culture in 2017 were fashion innovators, outspoken activists, social media influencers, cutti...
#36 of 57 The Best Comedians On Joe Rogan 4.2k VOTES Joe Rogan is a stand-up comedian himself, so it's no surprise that he's had a lot of comedians as guests on The Joe Rogan Ex...
#2 of 12 Who Will Win Season 17 of Dancing with the Stars? 1.2k VOTES The contestants for the 17th (!) season of  ABC's Dancing with the Stars was just announced. Like always, the Dancing W...
Lifetime Movies Actors and Actresses 15.2k VIEWS Lifetime Movies employs a wide range of actors -most of which you will recognize from more than just TV movies. Lifetime act...
17 Celebrities Who Were Raised As Scientologists 347.5k VIEWS This list contains information about celebrities who were raised as Scientologists loosely ranked by fame and popularity. Se...
37 Actresses Who Filmed While Pregnant 2.5M VIEWS Several actresses have filmed television shows and movies while they were pregnant. Some of these famous moms had their preg...
The Cast Of Saved By The Bell: Where Are They Now? 1.7M VIEWS Have you ever been sitting around, just daydreaming, thinking, "I wonder what's up with the Saved by the Bell cast now?...
Famous People of Italian Descent 298.5k VIEWS List of famous people of Italian descent loosely ranked by fame and popularity. Many famous people are of Italian descent. S...
Celebrities Who Live In Brooklyn 245.4k VIEWS Several famous actors, musicians, and comedians have lived in Brooklyn. Many celebrities were born in Brooklyn and others ...
Celebrity Patriot Fans 9.4k VIEWS The New England Patriots have some superstar football players on their roster, so it's no surprise that celebrity Patriot fa...

Leah Remini is also found on...