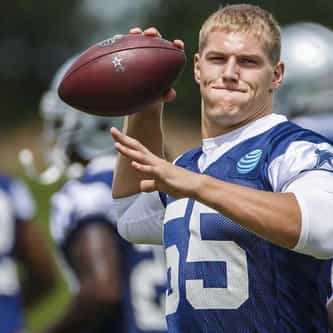 Leighton Vander Esch is an American football outside linebacker for the Dallas Cowboys of the National Football League (NFL). He played college football at Boise State. As a redshirt freshman, he appeared in all 12 games as a backup linebacker. He registered 20 tackles (14 solo), one sack, one fumble recovery and a first down on a fake punt. As a sophomore, he was limited to 6 games due to a neck injury, returning in the twelfth game against the United States Air Force Academy. He tallied ... more on Wikipedia

Leighton Vander Esch IS LISTED ON