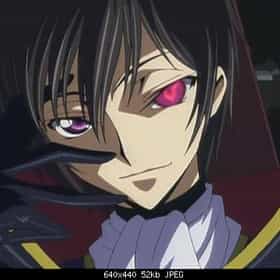 Lelouch vi Britannia (ルルーシュ・ヴィ・ブリタニア, Rurūshu vi Buritania), whose alias is Lelouch Lamperouge (ルルーシュ・ランペルージ, Rurūshu Ranperūji), is the title character and Byronic Hero of the Sunrise anime series Code Geass: Lelouch of the Rebellion. In the series, Lelouch is a former prince from the superpower Britannia who is given the power of the "Geass" by a witch known as C.C. Using the Geass and his genius-level intellect, Lelouch becomes the leader of the resistance movement known as The Black Knights under his alter ego Zero (ゼロ) to destroy the Holy Britannian Empire, an imperial monarchy that has been conquering various countries under control from his father. His Japanese voice ... more on Wikipedia

Lelouch Lamperouge is ranked on...

#48 of 222 The Greatest Anime Villains of All Time 554k VOTES At long last, here's our list of the greatest anime villains of all time, including villains from every genre and demographi...
#7 of 1,163 The Very Best Anime Characters 1.4M VOTES Who are the best anime characters ever? This list includes the top favorites in manga, possibly of all time. These are the c...
#13 of 107 The 25+ Saddest Anime Deaths of All Time 330.7k VOTES It's inevitable in almost any show you watch, but what are the saddest anime deaths of all time? For this list we're ranking...
#40 of 159 25+ Anime Boys You Definitely Crushed On 605.7k VOTES Anime draws viewers in with its captivating visuals, and the cutest characters created can be just as enticing. These men&nb...
#20 of 335 The Hottest Anime Guys of All Time 1.6M VOTES Trying to pick the hottest male anime character of all time is really hard, and that's why we want you all to vote up your...
#3 of 227 The Smartest Anime Characters of All Time 740.6k VOTES In anime, physical power isn't always everything. Very often brains will win over brawn, and because of that, we're ranking ...
#16 of 72 The Nerdiest Anime Characters of All Time 22k VOTES For this poll we're ranking the nerdiest anime characters of all time, but don't be surprised to see some entries that might...
#3 of 20 The 20 Best Quotes From Anime Villains 10.7k VOTES If there's one things villains are known for, it's monologuing. Big Baddies love to talk about their ingenious plans or...
#7 of 16 16 Famous Anime Last Words That Will Make You Cry Like A Baby 38.1k VOTES Prepare to have your feelings ripped out and thrown into a shredder, because these famous last anime words will make you cry...
#4 of 21 21 Anime Heroes Who Look Like They Should Be Villains 16.7k VOTES Not every anime hero actually looks the part. In fact, there are plenty of menacing anime heroes who look straight up villai...
#6 of 14 The 14 Best Anime Revenges Of All Time 11.6k VOTES Anime is filled with villainous personalities that use all kinds of sinister methods to hurt the people around them. The bes...
#12 of 13 The 13 Greatest Sibling Fights in Anime 11.8k VOTES Anyone who thinks blood is thicker than water hasn't watched enough anime. The style is loaded with familial brawls, some of...
#12 of 15 15 Anime Characters Who Prove Dark Isn't Necessarily Evil 5.6k VOTES In many people's minds, darkness is associated with evil, while light is associated with good. It's not just colors and shad...
#5 of 16 16 Anime Characters Who Get Completely Consumed By Vengeance 1.8k VOTES A lot of characters in anime are completely consumed by their thirst for vengeance. This overpowering need to seek revenge e...
#2 of 12 12 Anime Villains Who Were Actually Right All Along 15.7k VOTES Just because a character is technically a villain doesn't mean everything they do is terrible. There are plenty of anime v...
#10 of 15 The Meaning Behind Your Favorite Anime Character's Names 4.6k VOTES When it comes to anime, the attention to detail extends far beyond the vibrant illustrations and in-depth plotlines. Anime c...
#7 of 25 The Best Anime Character Theme Songs 24.3k VOTES One of the pros of watching anime rather than reading manga is the music. There are so many epic anime character themes out ...
#11 of 20 The Most Ridiculously Overpowered Anime Characters of All Time 163k VOTES We all know those anime series that have characters that are just way too overpowered. Characters that can take people out w...
#6 of 20 20 Heartwarming Anime Quotes You Can't Help But Smile At 4.8k VOTES Sometimes, an anime character says something that just makes your heart melt. It can be utterly adorable, or it can be tinge...
#11 of 20 The 20 Best Anime Mecha Pilots of All Time 3.1k VOTES Mecha - giant humanoid robots piloted by actual human beings - are perhaps the most "anime" things out t...
#3 of 12 The Most Powerful And Destructive Eyes In Anime 15.2k VOTES Characters in anime have some pretty impressive abilities. While some overpower their enemies with their martial a...
#8 of 45 The 30+ Greatest Masked Anime Characters of All Time 20k VOTES Why do anime characters wear masks? Some might be concealing their identity or hiding a secret, while others do it simply fo...
#15 of 54 35+ Egotistical Anime Characters Ranked By How Into Themselves They Are 16.2k VOTES Some anime characters have big heads, but these egomaniacs take it to a whole new level. This list ranks anime characters by...
#2 of 37 The Best British Anime Characters 1.5k VOTES How many British anime characters can you name? This list ranks the best British anime characters, with the help of your vot...
#5 of 32 The Best Anime Characters Who Wear Capes 1.6k VOTES How many cape wearing anime characters can you name? This list ranks the best anime characters who wear capes, with the help...
#32 of 39 The Best Anime Characters with Spiky Hair 13.9k VOTES How many anime characters with spiky hair can you name? This list ranks the best spiky haired anime characters, with the hel...
Which Anime Hero Are You, Based On Your Zodiac Sign? 89.3k VIEWS Anime heroes (and heroines) are the characters who keep an anime going – without them, there would be no story. Because...

Lelouch Lamperouge is also found on...