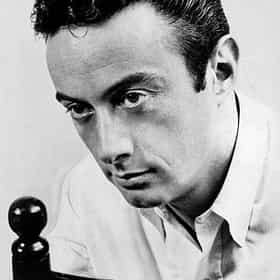 Leonard Alfred Schneider, better known by his stage name Lenny Bruce, was an American stand-up comedian, social critic and satirist. He was renowned for his open, free-style and critical form of comedy which integrated satire, politics, religion, and vulgarity. His 1964 conviction in an obscenity trial was followed by a posthumous pardon, the first in New York State history, by then-Governor George Pataki in 2003. He paved the way for future outspoken counterculture-era comedians, and his trial for obscenity is seen as a landmark for freedom of speech in the United States. ... more on Wikipedia

Lenny Bruce is ranked on...

#48 of 408 People who voted for Lenny Bruce... also upvote The Pink Panther Franchise on The Absolute Most Hilarious Movies Ever Made also upvote James Bond Franchise on The Best Spy Movies The Funniest Stand Up Comedians Of All Time 1M VOTES A ranked list of the best stand up comedians in the history of the art form. First and foremost, all of the people on this l...
#625 of 926 People We Wish Were Still Alive 3.3M VOTES RIP to our world's greatest achievers, those who changed the way we live and the ways we thought. This list of people we wis...
#254 of 362 The Funniest People of All Time 876.2k VOTES The funniest people of all time are a mix of actors, comedians, and even a few people who probably didn't start off trying t...
#44 of 106 The Most Original Comedians 45k VOTES Picking the top original comedians may start a bar fight but it's time to weigh in. What is the criteria for choosing some o...
Comedy Central's 100 Greatest Standups of All Time 432.9k VIEWS Comedy Central's one-hundred best stand-up comedians. These funny people have the best standup routines ever. For the full a...
American Stand-Up Comedians: The Best Comics In the USA 169.1k VIEWS American comedians are some of the top rated stand up comedians in the world. These are the greatest stand up comedians this...
14 Famous People with Narcolepsy 303.2k VIEWS This list of famous people with narcolepsy is loosely ranked by fame and popularity. Narcolepsy is a disorder caused by the ...
Comedians who went to Rehab 11.5k VIEWS This is a list of popular comedians who went to rehab, with photos. Rehabilitation is no joke, yet when a celeb enters detox...

Lenny Bruce is also found on...