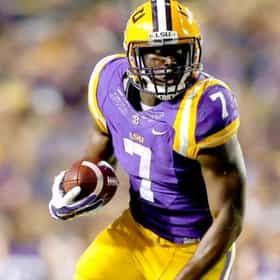 Leonard Joseph Fournette III is an American football running back for the Jacksonville Jaguars of the National Football League (NFL). He played college football at LSU, and was drafted by the Jaguars with the fourth overall pick in the 2017 NFL Draft. Fournette was a consensus All-America selection following his sophomore season in 2015, after setting school single-season records with 1,953 rushing yards and 22 rushing touchdowns, and leading the country with 162.8 rushing yards per game. Various experts regarded him as the best player in college football, comparing him to all-time great Herschel Walker. Fournette joined the Tigers with near-unprecedented hype in 2014 after an ... more on Wikipedia

Leonard Fournette is ranked on...

#6 of 74 Every Athlete Signed To Jay-Z's Roc Nation Sports, Ranked 1.9k VOTES Every athlete signed to Jay-Z's Roc Nation Sports has had a hand in helping the hip-hop mogul establish his sports agency as...
#29 of 59 Who Are the Best NFL Players Under 25 Right Now? 17.8k VOTES Being a star football player is one thing, but being known as one of the best NFL players under 25 is quite the impressive a...
#26 of 45 The Best College Football Quarterbacks of the 2010s 3.9k VOTES These are the best 2010s college quarterbacks, ranked by user votes. This list of the top 2010s college football quarterback...
#5 of 49 The Best 2010s College Running Backs 2.1k VOTES A lot happened during the 2010 era including some phenomenal running backs taking center stage on the collegiate football ma...
#14 of 58 Who Is the Best Running Back in the NFL Right Now? 59.2k VOTES Using a combination of speed, strength, and agility, NFL running backs must carry the football through elite defenses. ...
#4 of 38 The Best 2017 NFL Draft Picks 1.5k VOTES NFL fans, get hyped for the 2017 NFL Draft by voting for this year's best draft picks. With 32 first round picks, teams...
#8 of 60 The Best NFL Players From Louisiana 2.1k VOTES Here’s a list of the best NFL players from Louisiana! The Pelican State has given us the Peyton Manning and Eli Manning, two...
#57 of 108 The Coolest Players in the NFL Right Now, Ranked 4.7k VOTES The coolest players in the NFL currently are not necessarily the biggest stars. Many of these players could be considered am...
#31 of 106 The Best Jacksonville Jaguars of All Time 14.5k VOTES A list of the the best Jacksonville Jaguars of all time. The Jaguars are one of the NFL's more recent franchises. Formed in ...
#16 of 23 Who Will Win the 2018 NFL Offensive Player of the Year? 1.8k VOTES As we progress through this year's football season, it's about time to start making your predictions as to who will win...
#40 of 60 Who Will Win The 2018 NFL MVP Award? 22.1k VOTES UPDATED: Vote for the 2019 NFL MVP here. Patrick Mahomes was awarded the 2018 NFL MVP. With the exception of playin...

Leonard Fournette is also found on...