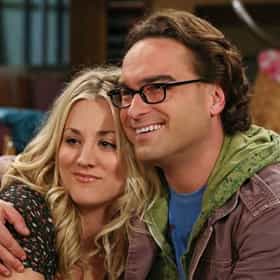 Leonard Leakey Hofstadter, Ph.D., is a fictional character on the CBS television series The Big Bang Theory, portrayed by actor Johnny Galecki. Leonard is an experimental physicist, who shares an apartment with colleague and best friend Dr. Sheldon Cooper. For his portrayal, Galecki was nominated for a Primetime Emmy Award and a Golden Globe Award in 2011. Leonard has been described as the straight man of the series. Penny is Leonard's next-door neighbor and main love interest, and the teasing of romance between the two of them is a major force driving the series. In "The Gorilla Dissolution", they finally become engaged. ... more on Wikipedia

Leonard Hofstadter is ranked on...

#52 of 503 The Funniest TV Characters of All Time 770.3k VOTES These are the funniest television characters ever created, as determined by the votes and selections of Ranker users. Lots...
#42 of 59 The Best Male Characters on TV Right Now 38.3k VOTES Some of the greatest characters in this new golden age of TV are male right now, and their characters span centuries, cultur...
#16 of 17 TV Love Interests Who Could Do Better 2.3k VOTES As in real life, TV romance is hardly perfect. But some small-screen relationships seem especially mismatched, and...
#29 of 36 Obnoxious TV Characters That Almost Make You Want To Stop Watching Your Favorite Shows 13k VOTES Even in the lauded golden age of television, terrible characters who ruin your favorite TV shows remain a staple in eve...
#13 of 62 The Greatest Middle Children in TV History 5.6k VOTES This is a list of the most memorable middle children from TV families. The list includes middle children from live action TV...
#3 of 75 The Most Mismatched TV Couples 51.9k VOTES List of the most mismatched TV couples. These couples, whether they stayed together, are the ones that make viewers scratch ...
#5 of 36 Who Is The Best Big Bang Theory Character? 15.8k VOTES Need a list of all characters from The Big Bang Theory? With so many funny Big Bang characters, it's tough to say who the gr...