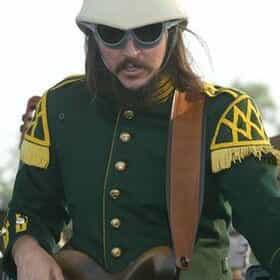 Leslie Edward Claypool (born September 29, 1963) is an American musician, singer, songwriter, producer, author, director, and actor. He is best known as the founder, lead singer, bassist, primary songwriter, and only continuous member of the rock band Primus. His playing style on the bass is well known for mixing tapping, flamenco-like strumming, whammy bar bends, and slapping. Claypool has also self-produced and engineered his solo releases from his own studio, Rancho Relaxo. In 2006, a full-length feature film, Electric Apricot, written and directed by Claypool, was released, as well as his debut novel South of the Pumphouse. He wrote and performed the theme songs for the adult ... more on Wikipedia

Les Claypool is ranked on...

#946 of 2,187 The Greatest Musical Artists of All Time 13.4M VOTES When VH1 polled fellow artists to name the greatest artists of all time, it seemed like a good idea---but in reality, the li...
#11 of 188 The All-Time Best Rock Bassists 208k VOTES The best rock bassists of all time are a varied bunch, and all the best bassists in rock are on this list. From the hard roc...
#324 of 633 The Greatest Live Bands of All Time 330.6k VOTES List of the greatest live bands or artists of all time, created and ranked by music fans worldwide asks the question "w...
#4 of 45 Musicians with the Best Onstage Banter 1.8k VOTES A concert isn't all about the music. Some of the best moments at any live show are what happens in between the songs - the m...
#25 of 197 The Best Avant-garde Bands/Artists 4.2k VOTES Avant-garde musicians are among the most interesting musicians in the world, Their curious creative nature allows to experim...
Ages of Rock Stars 29.9k VIEWS Do you know the ages of rock stars you listen to? Well, here you have them: the ages of top rock stars listed by fame and no...
I Saw 100+ Bands In 2019 And Ranked Them 3.9k VIEWS Back in 2015, I unintentionally saw over 100 bands, triggering my inner ranking compulsion. My completist gene also cam...

Les Claypool is also found on...