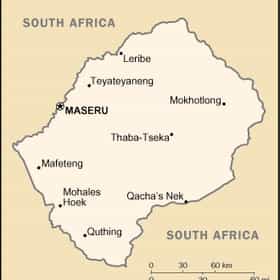 Lesotho, officially the Kingdom of Lesotho, is an enclaved landlocked country completely surrounded by South Africa. It is just over 30,000 km² in size and has a population slightly over two million. Its capital and largest city is Maseru. Lesotho is a member of the Commonwealth of Nations. The name Lesotho translates roughly into the land of the people who speak Sesotho. About 40% of the population lives below the international poverty line of US $1.25 a day. ... more on Wikipedia

Lesotho is ranked on...

#179 of 275 The Prettiest Flags in the World 1.3M VOTES What is the best flag in the world? What is the most beautiful flag in the world? Well, these are the best country flags in ...
#199 of 242 The Best Countries to Travel To 193.6k VOTES Which country is the best to travel to? The options are endless and vary from person to person. Do you prefer to experience ...
#42 of 50 The Best Countries for Women 15.7k VOTES List of the best countries for women ranked from best to worst. When determining which country is the best for women, many f...
Swine Flu Cases Around The World 6.9k VIEWS List of swine flu cases around the world. Swine flu outbreaks and swine flu countries are found here to show the impact of s...

Lesotho is also found on...