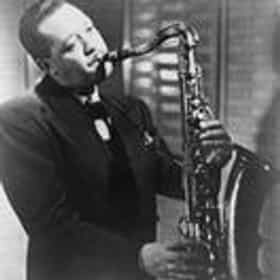 Lester Willis Young (August 27, 1909 – March 15, 1959), nicknamed "Pres" or "Prez", was an American jazz tenor saxophonist and occasional clarinetist. Coming to prominence while a member of Count Basie's orchestra, Young was one of the most influential players on his instrument. In contrast to many of his hard-driving peers, Young played with a relaxed, cool tone and used sophisticated harmonies, using what one critic called "a free-floating style, wheeling and diving like a gull, banking with low, funky riffs that pleased dancers and listeners alike".Known for his hip, introverted style, he invented or popularized much of the hipster jargon which came to ... more on Wikipedia

Lester Young is ranked on...

#7 of 194 The Greatest Saxophonists of All Time 18.8k VOTES These musicians, both living and dead, have forever shaped different genres and styles of music with their incredible talent...
#264 of 519 Which Artist Would You Bring Back From The Dead To Write One More Song? 122.8k VOTES Many of the world's greatest musicians remain highly respected even in death. The world often mourns the loss of t...
#7 of 69 The Greatest Jazz Saxophonists of All Time 4.5k VOTES Smooth jazz, fusion jazz, avant-garde jazz, crossover, West Coast, free jazz. Jazz music has influenced many different gen...
#5 of 45 The Best Saxophonists in the World 1.2k VOTES The saxophone is one of the most popular and diverse musical instruments in the world. It's permeated through dozens of genr...
Famous People Whose Last Name Is Young 13.3k VIEWS Being a fairly common name, it's no surprise there are a lot of famous people with the last name Young. Do you recognize all...
Famous People Named Lester 1.8k VIEWS Ever thought about how many famous people named Lester are out there? This list of celebrities named Lester will show you ...
Famous Saxophonists 11k VIEWS A List of Famous Saxophonists with photos! These are musicians who are masters of their craft. While it is often the singers...

Lester Young is also found on...