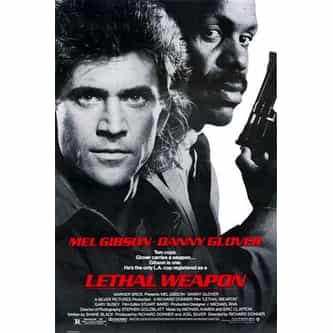 Tagline
Two Cops. Glover carries a weapon..... Gibson is one. He's the only L.A cop registered as a Lethal Weapon.

Lethal Weapon is a 1987 American buddy cop action film directed by Richard Donner, starring Mel Gibson and Danny Glover as a mismatched pair of L.A.P.D. detectives and stars Mitchell Ryan and Gary Busey as their primary adversaries. The film was a box office hit and resulted in a series of four films. ... more on Wikipedia

Lethal Weapon IS LISTED ON