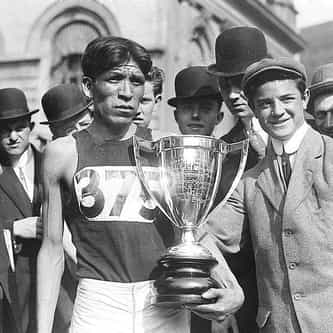 Louis Tewanima (1888 – January 18, 1969), also spelled Lewis Tewanima, was an American two-time Olympic distance runner and silver medalist in the 10,000 meter run in 1912. He was a Hopi Indian and ran for the Carlisle Indian School where he was a teammate of Jim Thorpe. His silver medal in 1912 remained the best U.S. achievement in this event until another Native American, Billy Mills, won the gold medal in 1964. Tewanima also competed at the 1908 Olympics, where he finished in ninth ... more on Wikipedia