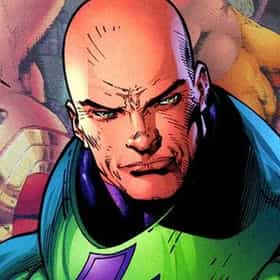 Alexander Joseph "Lex" Luthor is a supervillain appearing in American comic books published by DC Comics. Lex Luthor is the archenemy of Superman, although given his high status as a supervillain, he has also come into conflict with Batman and other superheroes in the DC Universe. Created by Jerry Siegel and Joe Shuster, the character first appeared in Action Comics #23. Luthor is a wealthy, power-mad business magnate, one of the most intelligent beings in the DC Universe, and has incredible technological prowess. Lex Luthor's goals typically center on killing Superman, the foremost obstacle to achieving the villain's megalomaniacal goals. Despite periodically wearing a ... more on Wikipedia

The Best Actors Who Played (Or Voiced) Lex Luthor 109 votes Can you imagine what it must feel like to be a diabolical genius when your arch-nemesis is literally the most powerful being...

Lex Luthor is ranked on...

#272 of 3,827 The Best Movie Characters of All Time 1M VOTES List of the best movie characters of all time, ranked by film buffs and people like you. This list includes performances by ...
#5 of 93 The Best Villains The Justice League Has Ever Faced 39.5k VOTES The original members of the Justice League have been a part of the DC universe for some time now, but it wasn't until 1960 t...
#4 of 176 The Greatest Villains in DC Comics, Ranked 88.9k VOTES Here are the best DC villains ranked best to worst by comic book fans. These popular bad guys in DC Comics are the best...
#1 of 55 The Best Superman Villains Ever 26.3k VOTES List of the most notorious villains from Superman's rogues gallery, as ranked by the fans. Superman has as wide array of adv...
#31 of 31 The Best Superhero Evolution on Film 36.1k VOTES As the studios keep cranking out superhero film after superhero film things change. Drastically. Whether it's technological...
#21 of 24 The Strongest Characters In The DCEU, Ranked 722 VOTES Who are the strongest characters in the DCEU (DC Extended Universe)? Here's where you get to decide. Below, you'll...
#30 of 58 The Best Villains the Teen Titans Have Ever Faced 5.4k VOTES We all love Teen Titans, but who are the best Teen Titans villains of all time? The Teen Titans are a group of young, teenag...
#10 of 12 12 Super Brutal, Violent Villains Who Should Be In The Next Suicide Squad Film 1.9k VOTES There's an ancient proverb that states: a superhero is only as good as their villain. Socrates said that, probably. Loo...
#2 of 20 The Best Archenemies in DC Comics 8.7k VOTES Archenemy, arch-rival, arch-nemesis whatever you want to call it, it's personal. The yin to the yang, the polar opposite, th...
#20 of 21 The Greatest Characters Played by Kevin Spacey, Ranked 534 VOTES This list contains information on the best characters played by Kevin Spacey ranked from best to worst by user votes. The ...
#5 of 29 The Best '90s Superhero Cartoon Voice Over Actors 9.3k VOTES Voice acting may be the most important element of a successful animated show, and though the voice acting in superhero car...
All DC Villains & DC Comics Enemies 402k VIEWS DC villains list is a huge list of all the villains from DC Comics. Supervillains make life miserable for the heroes and m...
12 Very Weird Times The Villains Subbed In For Superheroes 64.8k VIEWS In the ever-changing drama of comics, there are stories where supervillains have taken over for superheroes. ...
12 Comic Book Characters With Tragic Backstories Who We Refuse To Feel Sorry For Them 7.5k VIEWS Comic books are brimming with tragic origin stories. Apparently if you didn't have your parents murdered in front of you, yo...
All Superman Villains & Enemies Listed 265.7k VIEWS This is a collection of all Superman's supervillains that have appeared in comic books or movies as Superman enemies. Use ...
Every Non-Green Lantern Hero Or Villain Who Has Worn A Power Ring In The DC Universe 28.4k VIEWS If you think that the only DC characters who have worn a Lantern Ring are members of one of the color-coded Lantern Corps, y...
#6 of 7 Ranking Every Superman in the Comics 243 VOTES We’re ranking every Superman in the DC comics universe. Along with all Superman incarnations that appeared in the comic...
15 Classic Examples of Chaotic Evil Characters 23.9k VIEWS “Chaotic evil (CE) creatures act with arbitrary violence, spurred by their greed, hatred, or bloodlust.” - Dungeons and Drag...

Lex Luthor is also found on...