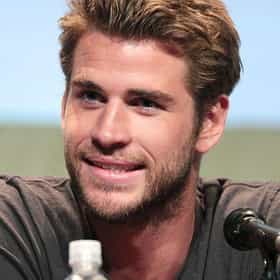 Liam Hemsworth (born 13 January 1990) is an Australian actor. He played the roles of Josh Taylor in the soap opera Neighbours and Marcus in the children's television series The Elephant Princess. In American films, Hemsworth starred as Will Blakelee in The Last Song (2010), as Gale Hawthorne in The Hunger Games film series (2012–2015), and as Jake Morrison in Independence Day: Resurgence (2016). Hemsworth's older brothers, Luke and Chris, are also actors. ... more on Wikipedia

Liam Hemsworth is ranked on...

#271 of 329 The Greatest Actors Who Have Never Won an Oscar (for Acting) 468.1k VOTES There are many actors who haven't won an Oscar. For 95 percent of the acting population, there is probably a good reason the...
#383 of 1,145 The Best Actors in Film History 2.2M VOTES The best actors ever are ranked here in this list of the best actors in film history. These are the greatest actors ever to ...
#5 of 156 The Hottest Men Of 2020, Ranked 62.8k VOTES Another year, another time to reflect upon the hottest men to walk the Earth. These male celebrities have got it going on in...
#5 of 242 The Hottest Men Of 2019, Ranked 2.8M VOTES UPDATED: Check out the hottest men of 2020!  This list rounds up the most handsome men of 2019. Some would say t...
#515 of 2,003 The Greatest Actors & Actresses in Entertainment History 1.7M VOTES The best actors and actresses of all time, male and female, ranked by film fans worldwide. This list of greatest actors and ...
#5 of 23 Who Should Star In A Rebooted X-Men For The MCU? 35.9k VOTES Now that the X-Men have relocated from Fox Studios to the House of Mouse, nearly 20 years of X-Men film history is about to ...
#519 of 524 Annoying Celebrities Who Should Just Go Away Already 1.2M VOTES The most annoying celebrities, ranked by entertainment fans themselves. These annoying celebs are obnoxious, overexposed, ...
#264 of 532 Famous Men You'd Want to Have a Beer With 1.8M VOTES If given the opportunity to sit down for a beer with any famous male figure, which famous men would you most want to get a d...
#18 of 45 45 Under 45: The New Class Of Action Stars 8.4k VOTES Bruce Willis, Angelina Jolie, and Jackie Chan showed the world what a badass action film star is capable of, albeit over the...
#2 of 88 Celebrities Who Should Be A-Listers 123k VOTES If pop culture has room enough for multiple A-list Jennifers and Chrises, it has enough time to make some space for cer...
#169 of 265 The Greatest Male Celebrity Role Models 107k VOTES Male celebrities as role models... what are we looking for? Maybe someone who knows how to lead, be a good team member, or h...
#29 of 53 Actors Who Almost Got the Part in a Marvel Film 54.7k VOTES Casting is truly an art form. Each and every cast member from starring, to supporting, to day-player affects the entire tone...
#8 of 31 Who Was America's Boyfriend In 2019? 300.1k VOTES UPDATED: Check out who is America's boyfriend in 2020! Let's face it, sometimes there are just those guys who are hard not...
#33 of 85 The Best Actors to Start Their Careers on Soaps 25.8k VOTES This is a list of the best actors to start their careers on soap operas, as voted on by experts and fans alike. Like th...
#22 of 78 Who Is America's Boyfriend in 2016? 40.1k VOTES What does America's boyfriend even mean? You know, he's the sweet, good-looking leading man (or hot new male celeb taking Ho...
#7 of 89 Who Was America's Boyfriend in 2018? 64.9k VOTES There is no shortage of well-liked male celebrities in the world, so which lucky man will be America's boyfriend in 2018? Fr...
#53 of 78 Who Should Have Been People's 2015 Sexiest Man Alive? 30.5k VOTES On November 18, 2015, David Beckham was named People Magazine's Sexiest Man Alive. It's an honor more sought after than any ...
#133 of 150 Who Do You Wish Would Guest Star on the Muppet Show? 7.8k VOTES Following their brand-new big screen Disney adventure, "The Muppets," Jim Henson's stable of beloved felt characte...
#10 of 13 Who Would Star In '10 Things I Hate About You' If It Was Made Today? 1.3k VOTES When it was released in 1999, 10 Things I Hate About You quickly became the teen flick of the moment, helping to e...
#8 of 44 Male Celebrities You'd Want Under Your Christmas Tree 7.5k VOTES Ah, the holiday season. There's no better time of year to cuddle up and get cozy with the one you love. Or, in my case, cudd...
#8 of 25 The Hottest Male Celebrity Butts 127.7k VOTES Famous men with nice rear ends: that's what this list is about. These are all fantastically attractive men with great a...
#10 of 12 Celebrity Men Who Are Way Younger Than You Think 624 VOTES Many of these surprisingly young male celebs have been in the spotlight for so long that it’s hard to believe their act...
Famous Capricorn Male Celebrities 82.1k VIEWS Known for their incredible ambition, it's inevitable that there would be so many famous Capricorn men. To reach the levels o...
Famous Tall Men Over 6'2 452.3k VIEWS Some of the tallest men in Hollywood may not seem so on your screen. Paired alongside other tall actors, shorts actors weari...
Nina Dobrev Loves and Hookups 158.7k VIEWS Who is Nina Dobrev dating? Many famous men have dated Nina Dobrev, and this list will give you more details about these luck...
#31 of 32 Dreamcasting Families We Want To See On Celebrity Family Feud 208 VOTES This is a list of celebrities we would love to see compete on Celebrity Family Feud, ranked by user votes. Some famous peopl...
Everyone January Jones Has Dated, From Nick Viall To Josh Groban 1.8k VIEWS She played the gorgeous homemaker and wife of Jon Hamm’s character on hit TV series Mad Men. So it’s no surprise there are a...
Eiza Gonzalez Loves and Hookups 15.6k VIEWS Who is Eiza Gonzalez dating? Many famous men have dated From Dusk till Dawn: The Series star Eiza Gonzalez, and this li...

Liam Hemsworth is also found on...