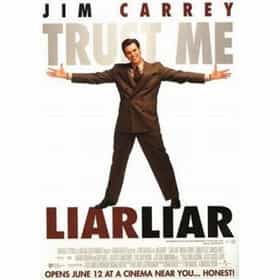 Liar Liar is a 1997 American comedy film written by Paul Guay and Stephen Mazur, directed by Tom Shadyac and starring Jim Carrey who was nominated for a Golden Globe Award for Best Performance by an Actor in a Motion Picture - Comedy/Musical. The film is the second of three collaborations between Carrey and Shadyac, the first being Ace Ventura: Pet Detective and the third being Bruce Almighty. It is also the second of three collaborations between Guay and Mazur, the others being The Little Rascals and Heartbreakers. It has been unofficially remade in Bollywood as Kyo Kii... Main Jhuth Nahin Bolta. ... more on Wikipedia

The Best Liar, Liar Quotes 53 votes The best Liar, Liar quotes make you realize how great the movie really is, even if you haven't seen it in a while. Let's ran...

Liar Liar is ranked on...

Liar Liar is also found on...