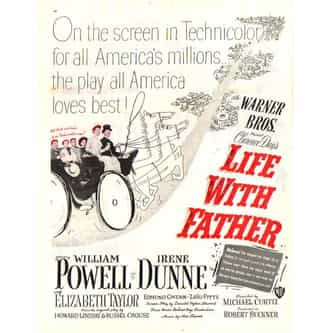 Life with Father is a 1947 American comedy film. It tells the true story of Clarence Day, a stockbroker who wants to be master of his house, but finds his wife and his children ignoring him, until they start making demands for him to change his own life. The story draws largely on the insistence by his family that Clarence be baptized to avoid going to Hell and Clarence's stubborn, ill-tempered nature. In keeping with the autobiography, all the children in the family are redheads. It stars ... more on Wikipedia

Life with Father IS LISTED ON