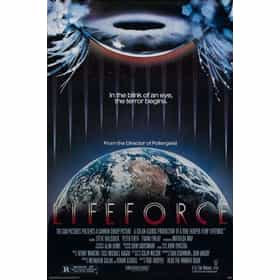 Lifeforce is a 1985 science fiction, horror film directed by Tobe Hooper and written by Dan O'Bannon and Don Jakoby, based on Colin Wilson's 1976 novel, The Space Vampires. Featuring Steve Railsback, Peter Firth, Frank Finlay, Mathilda May, and Patrick Stewart, the film portrays the events that unfold "after a trio of humanoids in a state of suspended animation are brought to earth after being discovered in the hold of an abandoned European space shuttle." ... more on Wikipedia

Lifeforce is ranked on...

Lifeforce is also found on...