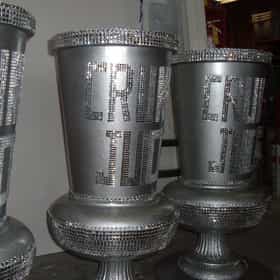 Jonathan Smith (born January 17, 1971), known professionally as Lil Jon, is an American rapper, songwriter, record producer and DJ based in Atlanta, Georgia. He was the lead frontman of the multi-platinum selling rap group, Lil Jon & The East Side Boyz and was instrumental in the emergence of the sub hip/hop genre Crunk. He is credited with bringing the genre into mainstream success, producing Top 10 Billboard Hot 100 singles "Get Low," "Goodies," "Cyclone," "Freek-a-Leek," and "Yeah!" "Yeah!" won a Grammy Award for Best Rap/Sung Performance. Lil Jon is also a frequent collaborator with friend and fellow rapper Pitbull. In ... more on Wikipedia

The Best Lil Jon Albums, Ranked 14 votes We're ranking the best Lil Jon albums of all time. One of the best rappers from Georgia, Lil Jon's discography features many...

#349 of 571 Things That Are Not As Cool As People Think They Are 1.1M VOTES Jorts are the dumbest things I've ever seen. Next to Toms shoes. Next to the Toyota Prius. Next to d-bags taking pictures of...
#100 of 512 The Worst Rappers of All Time 574.2k VOTES Featuring SoundCloud rappers who went mainstream to YouTubers who also rap (sort of), this is the definitive list of th...
#460 of 530 Annoying Celebrities Who Should Just Go Away Already 1.2M VOTES The most annoying celebrities, ranked by entertainment fans themselves. These annoying celebs are obnoxious, overexposed, ...
#56 of 74 Rappers Who Put on the Greatest Live Shows, Ranked 29.4k VOTES Sounding good on stage is one thing, but putting on the greatest live show is another—and there's quite a few rappers w...
#28 of 200 The Best Rappers From Atlanta 31.5k VOTES From new artists to some of the greatest hip hop artists of all time, here are the best rappers from Atlanta. Including&nbsp...
#10 of 25 The Best Rappers with Lil in Their Names, Ranked 65.4k VOTES Here are the best rappers with lil in their names. Rappers with "lil" names are among some of the most c...
#679 of 1,452 Celebrity Death Pool 2018 477.7k VOTES Welcome to Celebrity Death Pool 2018! In increasingly uncertain times, there remains one constant in life - we all die. Cele...
#121 of 175 Celebrities You're Sick Of In 2018 64k VOTES Given it was quite the year for scandal and controversy, it's no surprise there are so many celebs the public is tired ...
#124 of 180 The Worst Current Bands and Musicians 67.8k VOTES Taking the title as one of the worst current musicians is a tough pill to swallow, but someone's got to claim it—and we fans...
#215 of 338 The Greatest EDM Artists Of All Time 158.5k VOTES If you find yourself asking "what is EDM music?" you may have been living under a rock, but don't worry — this lis...
#18 of 28 The Best Hip House DJs 273 VOTES Hip house artists list, with photos, ranked best to worst by votes. List of good hip house DJs includes a filter so you can ...
25 Rappers Who Have Dreadlocks 396.4k VIEWS This list includes information about rappers with dreads, loosely ranked by fame and popularity. Dreadlocks are developed in...
Rappers Who Wear Grills 36.8k VIEWS A standard of hip hop fashion, many rappers wear grills. Rappers with grills come in many forms. Some famous rap stars ...
Pop Stars' Very First Tweets 10.3k VIEWS List of pop stars's first Tweets. Behold this collection of celebrity Tweets from some of the most popular musicians in the ...

Lil Jon is also found on...