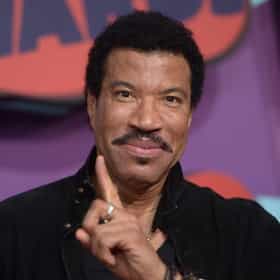 Lionel Brockman Richie Jr. (born June 20, 1949) is an American singer, songwriter, actor, and record producer. Richie's style of ballads with the Commodores and in his solo career launched him as one of the most successful balladeers of the 1980s. Beginning in 1968, Richie was a member of the funk and soul band the Commodores. The Commodores became established as a popular soul group; their first several albums had a danceable, funky sound, as in such tracks as "Machine Gun" and "Brick House." Over time, Richie wrote and sang more romantic, easy-listening ballads such as "Easy", "Three Times a Lady", "Still", and the breakup ballad ... more on Wikipedia

The Best Lionel Richie Albums of All Time 203 votes One of the true legends of R&B, Lionel Richie is one of the great soul singers of all time. Here, you can check out a co...

Lionel Richie is ranked on...

Lionel Richie is also found on...