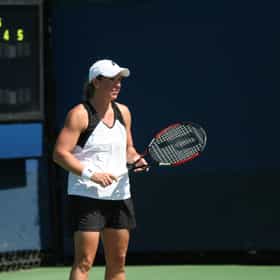 Lisa Raymond (born August 10, 1973) is an American retired professional tennis player who has achieved notable success in doubles tennis. Raymond has 11 Grand Slam titles to her name: 6 in women's doubles and 5 in mixed doubles. On June 12, 2000, she reached the World No. 1 Ranking in doubles for the first time. Her career high singles ranking was No. 15 in October 1997. Over the course of her career, Raymond won four singles titles and 79 doubles titles, and held the World No. 1 doubles ranking for a total of 137 weeks. Earning more than US$10 million in prize money in her career, Raymond reached the quarterfinals in singles at the 2004 Australian Open and the 2000 Wimbledon ... more on Wikipedia

Lisa Raymond is ranked on...

#421 of 2,195 People who voted for Lisa Raymond... People outside of the US are 9x more likely to vote for this The Best Athletes Of All Time 34.1M VOTES The greatest athletes of all time: a list of the most dominant, iconic, famous players in the history of spor...
#67 of 76 The Greatest Women's Tennis Players of All Time 63.1k VOTES The best women's tennis players of all time are multiple Grand Slam champions, Olympic tennis gold medalists and simply the ...
College & Professional Athletes Who Are Openly Gay 164.7k VIEWS List of openly gay athletes involved in both professional and college sports. This list includes athletes who have "com...
Famous People Named Lisa 28.3k VIEWS If your name is Lisa, then you're in some great company. Here's our list of the most famous people named Lisa, including pho...
Famous Lesbian Athletes 73.8k VIEWS A number of professional female athletes are proud members of the LGBTQ community. Whether these lesbian athletes are stars ...
#49 of 75 The Best Tennis Players from the United States 26.6k VOTES This is a list of the best tennis players from United States, ranked by popularity, with photos of the players when availabl...
Athletes Who Are Gay 198.2k VIEWS Thanks to these prominent athletes who are gay, the sports world is becoming more and more accepting of homosexual players. ...

Lisa Raymond is also found on...