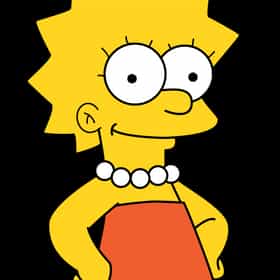 Lisa Marie Simpson is a fictional character in the animated television series The Simpsons. She is the middle child of the Simpson family. Voiced by Yeardley Smith, Lisa first appeared on television in The Tracey Ullman Show short "Good Night" on April 19, 1987. Cartoonist Matt Groening created and designed her while waiting to meet James L. Brooks. Groening had been invited to pitch a series of shorts based on his comic Life in Hell, but instead decided to create a new set of characters. He named the elder Simpson daughter after his younger sister Lisa Groening. After appearing on The Tracey Ullman Show for three years, the Simpson family were moved to their own series on ... more on Wikipedia

Lisa Simpson is ranked on...

#55 of 314 People who voted for Lisa Simpson... People in the Central US are 2x more likely to vote for this The Greatest Cartoon Characters in TV History 845.6k VOTES Throughout the annals of TV history, cartoon stars have shone brightly, bringing joy to children and adults alike....
#319 of 787 The Most Annoying TV and Film Characters Ever 1.5M VOTES You know them. You hate them. Honestly, who knows why these characters even exist. Did someone think they were funny? M...
#18 of 96 The Best Female Characters on TV Right Now 152k VOTES Some of the greatest characters in this new golden age of TV are female right now, and their characters span centuries, cult...
#32 of 377 The Greatest Female Characters in Film History 225k VOTES List of the best female movie characters of all time, whether young or old. This list includes the best female movie charact...
#97 of 487 The Funniest TV Characters of All Time 781.9k VOTES These are the funniest television characters ever created, as determined by the votes and selections of Ranker users. Lots...
#32 of 162 The Best Cartoon Characters of the 90s 295.5k VOTES The 1990s was a time when all types of cartoons were introduced to the general public and thrived within the the realm of po...
#29 of 286 The Funniest Female TV Characters 104.6k VOTES The funniest female TV characters are those whom we've both laughed at and laughed with, sharing their hilarious moments and...
#9 of 75 The Greatest Geeky Girls on TV 44.9k VOTES List of the greatest female geeky TV characters. The best and nerdiest women on television are ranked on this page based on ...
#2 of 61 The Greatest Middle Children in TV History 5.6k VOTES This is a list of the most memorable middle children from TV families. The list includes middle children from live action TV...
Which Of 'The Simpsons' Characters Are You According To Your Zodiac Sign? 52.1k VIEWS Ever felt like Homer Simpson as you chow down on a whole box of doughnuts, or a little too much like Ralph Wiggum as yo...
#1 of 61 Fictional Characters Named Lisa 1k VOTES List of notable fictional characters whose name is Lisa, including photos when available. The fictional characters named Lis...
How The Simpsons Evolved Over Time 16.9k VIEWS The Simpsons manages to be both timeless and a throwback - it's been on television for 30 years. Some critics migh...
Beliefnet's Top 10 Most Empowering Women on TV Today 5.1k VIEWS Beliefnet says: "These characters have overcome or be struggling with hardships that make them better women; and they e...

Lisa Simpson is also found on...