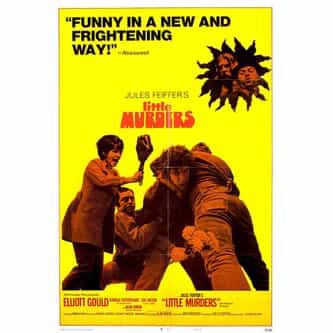 Little Murders is a 1971 black comedy film starring Elliott Gould and Marcia Rodd, directed by Alan Arkin in his feature directorial debut. It is the story of a girl, Patsy, who brings home her boyfriend, Alfred, to meet her severely dysfunctional family amidst a series of random shootings, garbage strikes and electrical outages ravaging the neighborhood. The film originated as a play written by cartoonist Jules Feiffer which was staged on Broadway in 1967 but which lasted only seven ... more on Wikipedia

Little Murders IS LISTED ON