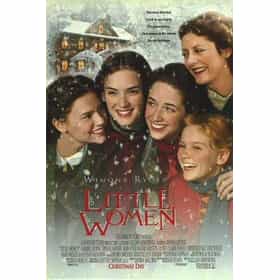 Little Women is a 1994 American drama film directed by Gillian Armstrong. The screenplay by Robin Swicord is based on the Louisa May Alcott novel of the same name. It is the fifth feature film adaptation of the Alcott classic, following silent versions released in 1917 and 1918, a 1933 George Cukor-directed release, a 1949 adaptation by Mervyn LeRoy, and a 1978 television adaptation by Gordon Hessler. It was released exclusively on December 21, 1994, and was released nationwide four days later on December 25, 1994, by Columbia Pictures. ... more on Wikipedia

How Greta Gerwig’s ‘Little Women’ Handled Important Moments Compared To The 1994 Film And The Novel 865 views Little Women, a classic coming-of-age-story of a tight-knit, Civil War-era, Massachusetts family, has been a best-selling no...

Little Women is ranked on...

Little Women is also found on...