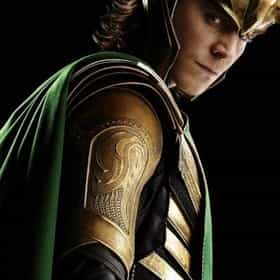 Loki is a fictional character appearing in American comic books published by Marvel Comics. Created by writer Stan Lee, scripter Larry Lieber and penciller Jack Kirby, a version of the character first appeared in Venus #6 (August 1949). The modern day incarnation of Loki first appeared in Journey into Mystery #85 (October 1962). The character, which is based on the Norse deity of the same name, is the Asgardian god of mischief. He is the adopted brother and often enemy of the superhero Thor, however over the years the character has been depicted as an antihero. In 2009, Loki was ranked as IGN's 8th Greatest Comic Book Villain of All Time and in 2014 was ranked again by IGN, this time ... more on Wikipedia

The Best Loki Quotes 4.7k votes Here are the best Loki quotes from the Marvel Cinematic Universe. Played by Tom Hiddleston, Loki is the adopted brother of T...
The Best Loki Storylines in Comics 71 votes If you watched most of the earlier MCU films, you already know that Loki is an incredibly complex character who, at times, h...
What Is The Time Variance Authority And Is Loki Going To Burn It To The Ground On Disney Plus? 220 views The events of Avengers: Endgame may have introduced time travel to the Marvel Cinematic Universe, but long-time readers of M...

Loki is ranked on...

Loki is also found on...