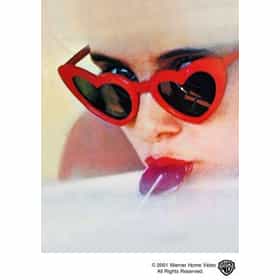 Lolita is a 1962 comedy-drama film directed by Stanley Kubrick based on the novel of the same title by Vladimir Nabokov, about a middle-aged man who becomes obsessed with a teenage girl. The film stars James Mason as Humbert Humbert, Sue Lyon as Dolores Haze, and Shelley Winters as Charlotte Haze, with Peter Sellers as Clare Quilty. Due to the MPAA's restrictions at the time, the film toned down the more provocative aspects of the novel, sometimes leaving much to the audience's imagination. The actress who played Lolita, Sue Lyon, was 14 at the time of filming. Kubrick later commented that, had he realized how severe the censorship limitations were going to be, he probably never would ... more on Wikipedia

The Real Story That Inspired "Lolita" Is Somehow More Disturbing Than The Actual Book 664.9k views Russian-American novelist Vladimir Nabokov wrote the novel Lolita in 1955 that drew inspiration from the true-crime Sally Ho...

Lolita is ranked on...

Lolita is also found on...

The Best Movies of 1962 List of All Black Comedy Movies