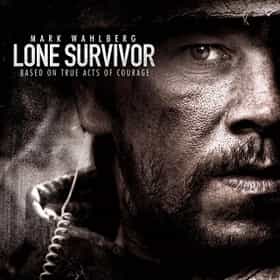 Lone Survivor is a 2013 American film written and directed by Peter Berg, and starring Mark Wahlberg, Taylor Kitsch, Emile Hirsch, Ben Foster and Eric Bana. The film is based on the 2007 nonfiction book of the same name by Marcus Luttrell with Patrick Robinson. Set during Afghanistan, Lone Survivor dramatizes the failed United States Navy SEALs counter-insurgent mission Operation Red Wings, during which a four-man SEAL reconnaissance and surveillance team was tasked to track down Taliban leader Ahmad Shah. Berg first learned of the book Lone Survivor in 2007 while he was filming Hancock. ... more on Wikipedia

Lone Survivor is ranked on...

#214 of 363 The Best Movies Based On Books 143k VOTES List of the best movies based off books, voted on by cine-bibliophiles everywhere. Many movies are based off of books but wh...
#247 of 599 The Greatest Epic Movies Ever Made 288.1k VOTES Need some movie ideas? Check out this list of the best epic films of all time, which encompasses some of the best movie...
#209 of 548 The Greatest Movies for Guys 137.5k VOTES The best guy movies of all time, ranked by fans and critics. This list includes some of the greatest guy movies ever to hit ...
#7 of 24 Brutal War Movies That Absolutely Got It Right 194.7k VOTES War is a terrible, awe-inspiring monster that’s fascinated filmmakers almost as long as movies have existed. The valor displ...
#22 of 201 The Best Movies of 2013 25.4k VOTES A list of the best movies of 2013, as ranked by movie fans and critics. Every year, around the holiday season, film critics ...
#92 of 211 The Best Adventure Movies 77.3k VOTES List of adventure movies. What are the best adventure movies? If you're a thrill-seeking, adrenaline-obsessed movie-goer, th...
#9 of 80 The Most Patriotic Movies of All Time 15.7k VOTES The most patriotic movies ever made on the list below will make you proud to be an American. Films celebrating the country's...
#9 of 32 The Best Drama Movies of 2014 691 VOTES Let's get dramatic... There were a lot of great drama movies released in 2014, but which were the greatest? This list of the...
#2 of 23 Great Movies So Patriotic, They Are Basically American Propaganda 1.6k VOTES The most patriotic movies set out to inspire a healthy surge of pride in movie-goers across America - and they're ess...
#166 of 735 The Greatest Action Movies of All Time 439.7k VOTES The greatest action movies of all time starring some of the best action stars to have ever fought on screen. The best action...
#23 of 133 The Best Drama Movies Of The 2010s Decade 1.8k VOTES What are the best drama films of the decade? That's what this list will determine, based on your votes. We want you to choos...
#29 of 304 The Best Military Movies Ever Made 125.5k VOTES Good military films give civilians a taste of what our troops go through on the battlefield and throughout their daily lives...
#31 of 93 The Best Drama Movies for Action Fans 574 VOTES These are the best action drama movies the hybrid genre has to offer. They tend to be slower movies that are punctuated...
#11 of 31 The Best Action Movies of 2014 6k VOTES Buckle up! It's time to blast through the explosive list of the best action movies from 2014. We've got superheroes and muta...
#16 of 46 The Very Best Military Shows & Movies 1k VOTES Depicting the military in television and film takes a lot of work. Technical advisers are needed to ensure uniforms and mili...
#47 of 114 The Best R-Rated Action/Adventure Movies 1.7k VOTES List of R-Rated action/adventure movies, ranked from best to worst with movie trailers when available. This list takes the b...