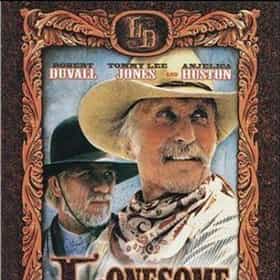 Lonesome Dove is a 1989 American epic Western adventure television miniseries directed by Simon Wincer. It is a four part adaptation of the 1985 Pulitzer Prize-winning novel of the same name by Larry McMurtry and is the first installment in the Lonesome Dove franchise. The series stars Robert Duvall and Tommy Lee Jones. The series was originally broadcast by CBS over four nights in February 1989, drawing a huge viewing audience, earning numerous awards, and reviving both the television western and the miniseries. An estimated 26,000,000 homes tuned in to watch Lonesome Dove, unusually high numbers for a Western at that time. ... more on Wikipedia

Lonesome Dove is ranked on...

Lonesome Dove is also found on...