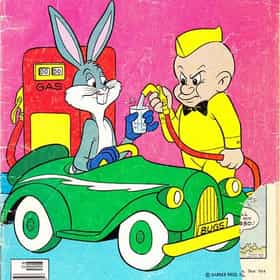 Tiny Toon Adventures
These Dark Bugs Bunny Fan Theories Will Blow Your Mind 963 votes Alongside Mickey Mouse, Bugs Bunny is one of the most notable and beloved cartoon characters of all time. Bugs has been a ma...
The Best Looney Tunes Characters of All Time, Ranked! 33.8k votes If you were once a kid with a television, you probably have specific Looney Tunes characters that will forever hold a specia...
Looney Tunes Fan Theories That Will Burrow Their Way Into Your Brain 32.6k votes Even though Looney Tunes began airing in 1930, major questions remain unanswered to this day. Because decades-old footage r...
Wile E. Coyote And Roadrunner Are In A Neverending Hellcycle And It's Obvious If You Pay Attention 663 votes Since 1949, two animated adversaries have been locked in a vicious game. The premise is simple: one is a hungry but hapless ...
The Strongest Characters In 'Looney Tunes' 1.4k votes While the Looney Tunes cartoon characters might seem colorful and cheery, they're all a bit evil. The strongest Looney Tunes...
How ‘Looney Tunes’ Characters Represent The Seven Deadly Sins 81.1k views These dreaded vices pop up in everything from acclaimed literature to cartoons and sitcoms. The seven cardinal sins are so i...
The Best Looney Tunes TV Shows Ever Made 98 votes Since the first ever Looney Tunes series debuted in 1960 with The Bugs Bunny Show, audiences of all ages have tuned in from ...
The Best Yosemite Sam Character Quotes From 'Looney Tunes' 260 votes Bugs Bunny would not be the lovable cartoon hero everybody adores if he didn't have some adversaries to go up against. While...

Looney Tunes is ranked on...

#24 of 2,297 The Greatest TV Shows Of All Time 1.5M VOTES Choosing the best TV shows of all time means taking into account the best TV dramas, the best TV comedies, the best cartoons...
#2 of 139 The Best, Most Fab Cartoons from the 70s 106.2k VOTES Check out this totally far out list of 70s cartoons! In the 70s, cartoons became more popular than ever. With shows like Loo...
#108 of 590 The Best TV Theme Songs of All Time 323.2k VOTES The best TV theme songs and TV intros of all time will take you back to some of the greatest moments in TV. Television theme...
#146 of 145 The Most Annoying Kids Shows of All Time 84k VOTES There's something about TV shows made for children that can really put the rest of the world on edge. The loudness, the obno...
#13 of 422 The Best TV Shows to Rewatch 133.5k VOTES List of the best TV shows to rewatch, as ranked by television fans and critics. When the weekend comes around and you can’t ...
#8 of 20 T-Shirts You Regret Wearing as a Kid in the '90s 10.6k VOTES The 1990s were a peak time in history for terrible fashion, and among that bad fashion were some truly regrettable '90s t-sh...
#52 of 134 The Funniest Shows To Watch When You're Stoned 9.1k VOTES Getting high and watching television go hand-in-hand, but finding the perfect show to watch while getting your smoke on can ...
#2 of 15 If Anyone Says They've Completely Watched These TV Shows, They're Probably Lying To You 11.2k VOTES While you're probably telling the truth about most TV shows you claim to have completed, there are at least some you're...
#43 of 43 What to Watch If You Love 'The Simpsons' 114 VOTES The Simpsons is an animated comedy that garnered the love and affection of hordes of fans, but if you’ve finished watching t...
#11 of 374 The Best Children's TV Shows 49.2k VOTES Here you have it, folks: a list of the very best kids' shows on television, ranked from best to worst, as voted on by people...
#1 of 135 The Very Best Cartoon TV Shows 40.2k VOTES The very best cartoon series shows on television, ranked from best to worst. This list of the greatest cartoon series shows ...
#3 of 46 The Best Boomerang TV Shows 19.5k VOTES List of popular Boomerang shows, ranked from best to worst. This list of the top current and cancelled Boomerang TV series i...