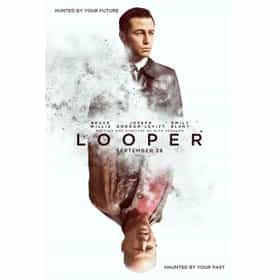 Looper is a 2012 American science fiction action thriller film written and directed by Rian Johnson and starring Bruce Willis, Joseph Gordon-Levitt, and Emily Blunt. In the film, time travel is invented by the year 2074 and is used by bad organizations to send those they want ended into the past where they are taken out by "loopers", men paid with silver bars strapped to their targets. Joe, a looper, encounters himself when his older self is sent back in time to be taken out. ... more on Wikipedia

Looper is ranked on...

Looper is also found on...