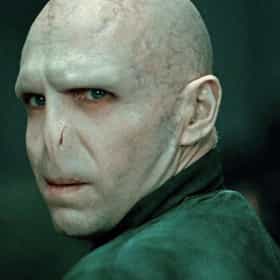 Lord Voldemort is a fictional character in J. K. Rowling's Harry Potter series. Voldemort first appeared in Harry Potter and the Philosopher's Stone, which was released in 1997. Voldemort appeared either in person or in flashbacks in each book and film adaptation in the series, except the third, Harry Potter and the Prisoner of Azkaban, where he is mentioned. In the series, Voldemort is the archenemy of Harry Potter, who according to a prophecy has "the power to vanquish the Dark Lord". Almost no witch or wizard dares to speak his name, instead referring to him by epithets such as "You-Know-Who", "He-Who-Must-Not-Be-Named" or "the Dark Lord". ... more on Wikipedia

Lord Voldemort is ranked on...

#84 of 156 The Best Video Game Villains of All Time 92.4k VOTES When it comes down to it, who is the best video game villain of all time? Video games typically a focus on the protagonist -...
#5 of 20 Which Fictional Wizard Would Win In A Magical Mega-Duel? 10.1k VOTES Shooting lightning from your fingertips, whispering a magic word to secretly enchant a monster, signing runes in the air.&nb...
#9 of 961 People who voted for Lord Voldemort... People under 30 are 2x more likely to vote for this also upvote Dark Knight Franchise on The Best Superhero Movies Ever Made The Greatest Movie Villains of All Time 1.2M VOTES While some of us tend to despise movie villains, plenty of movie-goers favor some of these antagonists. Whether that's ...
#5 of 15 15 Movie Villains You Could Outsmart 2.6k VOTES Imagine you're a scary cinematic supervillain intent upon destroying your adversaries and - likely - the entire wo...
#32 of 53 53 Behind The Scenes Photos Of Movie Villains 176.6k VOTES Some of the greatest movie villains can give you nightmares if you spend too much time thinking about their faces. But ...
#27 of 51 Funny Names to Give a Hamster 27.4k VOTES If you need some hamster name ideas, this is the place to be. Did you just get a snuggly, cuddly, fat-cheeked hamster of you...
#11 of 16 The Cutest Funkos Of The Most Irredeemably Evil Characters 292 VOTES Funko Pop has expanded its line to include a ton of characters, from Cinderella's adorable Gus Gus to horror icons...
#18 of 19 The Ugliest Movie Villains in Film History 10.9k VOTES Heroes are great and all, but our favorite part of a film is usually the villain. They get the best lines, they have awesome...
#11 of 30 Funny Full Names of Nefarious Villains 4k VOTES Haven’t you ever wondered about the full names of villains? No one is actually named “Leatherface” or “Ultron.” That’s why ...
#8 of 43 The Greatest Wizard Characters of All Time 6.7k VOTES For this poll we've created a list of the greatest wizards of all time, featuring wizards you know from movies, television, ...
The Cast of Harry Potter: Where Are They Now? 5M VIEWS When J.K. Rowling’s wildly-popular and bestselling Harry Potter book series was adapted for the screen, fans finally got to ...
What Nerdy Fictional Villain Would You Be Based On Your Zodiac? 5.9k VIEWS Your horoscope is a beautiful and powerful thing, but it also has a dark side. While you can use the zodiac to figure out wh...
Which Harry Potter Character Are You, According To Your Zodiac Sign? 285.9k VIEWS J.K. Rowling's Wizarding World is a fascinating place full of characters we love and loathe, and it begs the ...

Lord Voldemort is also found on...