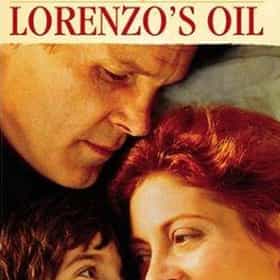 Lorenzo's Oil is a 1992 American drama film directed by George Miller. It is based on the true story of Augusto and Michaela Odone, two parents in a relentless search for a cure for their son Lorenzo's adrenoleukodystrophy. The film was nominated for two Academy Awards. It was filmed primarily from September 1991 to February 1992 in Pittsburgh, Pennsylvania. The film had a limited release in North America on December 30, 1992, with a nationwide release two weeks later on January 15, 1993. ... more on Wikipedia

Lorenzo's Oil is ranked on...

#41 of 124 The Best Movies of 1992 12.2k VOTES A list of the best movies of 1992, from children's movies like Aladdin to action movies like Under Siege. The '90s were a de...
#273 of 710 The Best Movies Roger Ebert Gave Four Stars 163.8k VOTES List of movies Roger Ebert gave four stars, ranked best to eh. This is NOT a complete list of all of Roger Ebert's four star...
#14 of 39 The Best Medical Movies Based on True Stories 3.7k VOTES What are the best medical movies based on true stories? This list includes great historical movies such as Philadelphia, Pat...
#11 of 24 Great Movies About Sick & Dying Children 885 VOTES There's nothing more tragic than a child dying before they've had a chance to experience all that life has to offer. The top...
13 Pretty Accurate Movies About Historical Illnesses 25.5k VIEWS Throughout history, humanity has been plagued by innumerable diseases that have deeply impacted the course of our global civ...
#44 of 101 The Best Docudrama Movies 1.7k VOTES A list of all the best docudrama movies ever made, many of which are streaming on Netflix and Amazon Prime. This docudrama m...
#16 of 78 The Best Nick Nolte Movies 3k VOTES List of the best Nick Nolte movies, ranked best to worst with movie trailers when available. Nick Nolte's highest grossing m...
#11 of 27 The Best Movies About Oil 225 VOTES The world’s dependency on oil and the effects its use has on the climate, culture, economics, and politics of different coun...

Lorenzo's Oil is also found on...