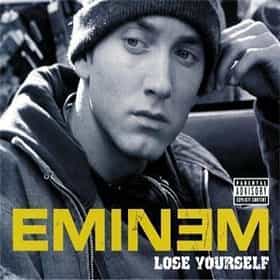 "Lose Yourself" is a song by American rapper Eminem from the soundtrack to the 2002 motion picture 8 Mile. The song's lyrics explicitly sum up the background of Eminem's character in 8 Mile, B-Rabbit, with the first verse summing up much of the plot of the movie: his struggles and eventual defeat over his many problems and obstacles to gain the respect of other rappers."Lose Yourself" was a commercial success, becoming Eminem's first Billboard Hot 100 number-one single and remaining there for twelve consecutive weeks. "Lose Yourself" won the Academy Award for Best Original Song, making it the first hip hop song to receive the award, and also won the Grammy ... more on Wikipedia

lists about Lose Yourself

Behind The Scenes Of ‘Lose Yourself’ And Eminem’s Starring Role In ‘8 Mile’ 5.9k views Prior to 1999, most of the country just knew New York City and Los Angeles as hip-hop epicenters. That all changed in the la...

Lose Yourself is ranked on...

#2 of 29 The Best Songs Ever Written For Movies 18.2k VOTES The top theme songs to our favorite films are all ranked here and ready for your votes. Whether the song makes you "Hap...
#59 of 67 The Most Underrated Eminem Songs 10.7k VOTES With a rapper like Eminem (aka Slim Shady), it's easy to focus on his abundance of hits. His catalog boasts some of the bigg...
#1 of 33 The Best Rap Songs About Not Giving Up 1.9k VOTES Adversity is a common theme in hip hop, which is why some of the best rap songs are about not giving up in life. Whether it'...
#195 of 229 The Best Eminem Songs of All Time 113.5k VOTES List of the best Eminem songs, ranked by rap fans like you. Considered one of the greatest rappers of all times, Eminem has ...
#72 of 100 The Best Karaoke Songs For Men 550 VOTES What are the best karaoke songs for men? The answer to this question of course depends on the singer: while some guys may be...
#2 of 27 The Best Hip Hop Music Videos 2.9k VOTES The best hip hop music videos, voted on, suggested and ranked by music lovers, take us back decades to earlier days of rap a...