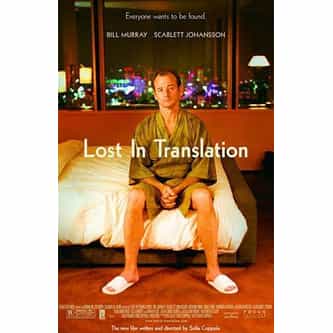 Tagline
Everyone wants to be found.
Sometimes you have to go halfway around the world to come full circle.

Lost in Translation is a 2003 American comedy-drama film written and directed by Sofia Coppola. It stars Bill Murray, Scarlett Johansson, Giovanni Ribisi, Anna Faris, and Fumihiro Hayashi. The film revolves around an aging actor named Bob Harris and a recent college graduate named Charlotte who develop a rapport after a chance meeting in a Tokyo hotel. ... more on Wikipedia

Lost in Translation IS LISTED ON