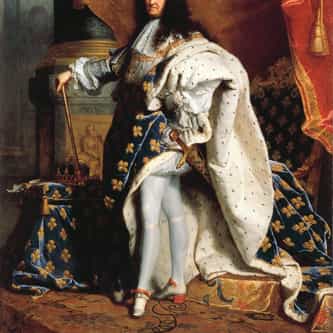 Louis XIV (Louis Dieudonné; 5 September 1638 – 1 September 1715), known as Louis the Great (Louis le Grand) or the Sun King (le Roi Soleil), was King of France from 14 May 1643 until his death in 1715. His reign of 72 years and 110 days is the longest recorded of any monarch of a sovereign country in European history. In the age of absolutism in Europe, Louis XIV's France was a leader in the growing centralisation of power.Louis began his personal rule of France in 1661, after the ... more on Wikipedia

lists about Louis XIV of France

349.7k readers The Biggest Scandals From The Court Of Louis XIV

Louis XIV of France IS LISTED ON

#167 of 2,437
2.6M VOTES The Most Influential People of All Time People on the West Coast are 2x more likely to vote for this
#4 of 14
4.3k VOTES Who Was The Most Self-Indulgent Royal In History?
#118 of 350
993.5k VOTES The Most Important Leaders In World History People in the South are 2x more likely to vote for this
#5 of 12
548 VOTES What The Drink Of Choice Was For Historical Royals
148.3k VIEWS The Different Physical Sizes Of Historical Rulers
30.7k VIEWS Famous People Named Louis or Lou
16 Famous Bodies From History Found In Inconspicuous Places List of Famous Monarchs Famous People Who Died in France Famous Politicians from France