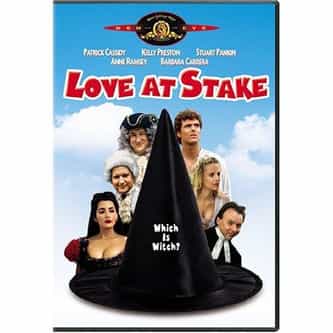 Love at Stake is a 1987 comedy film, directed by the creator of the TV series The Ed Sullivan Show and director of The Werewolf of Woodstock John C. Moffitt, based on a screenplay by Lanier Laney and Terry Sweeny. It stars Patrick Cassidy and Kelly Preston, with Barbara Carrera, Bud Cort, Dave Thomas and Stuart Pankin. Joyce Brothers makes a cameo appearance as herself. The film is an obvious spoof of the infamous Salem witch trials, moving in the Mel Brooks comedy vein in Blazing Saddles, ... more on Wikipedia

Love at Stake IS LISTED ON