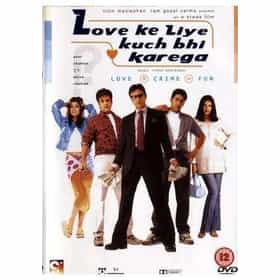 Love Ke Liye Kucch Bhi Karega is a Bollywood crime comedy film directed by E. Nivas and produced by Ram Gopal Varma and Nitin Manmohan. The film stars Saif Ali Khan, Fardeen Khan, Sonali Bendre, Aftab Shivdasani and Twinkle Khanna in lead roles. It released on June 29, 2001, and is a remake of Telugu movie Money. This movie is loosely based on the 1996 American dark-comedy, Fargo. The story is about a troubled young businessman, who hires fake kidnappers to abduct his wife, and use his father-in-law for the installment money. The film received great reviews upon release, and was an superhit at the box office. It featured in top 3 grosser of that year. ... more on Wikipedia