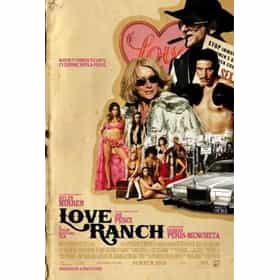 Love Ranch is a 2010 American drama film directed by Taylor Hackford and starring Helen Mirren, Joe Pesci, Sergio Peris-Mencheta, Gina Gershon and Bryan Cranston. It was written by Mark Jacobson. The film is based on the lives of Joe and Sally Conforte, a married couple who opened the first legal brothel in the United States, the Mustang Ranch in Storey County, Nevada, Violence results when their marriage is tested by infidelity. The story also alludes to the mysterious circumstances surrounding the assassination of famous Argentinian boxer Ringo Bonavena in the Mustang Ranch. ... more on Wikipedia

Love Ranch is ranked on...