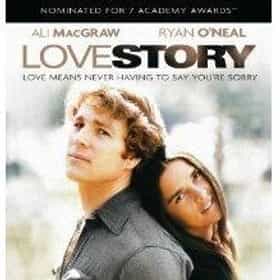 Love Story is a 1970 romantic drama film written by Erich Segal, who also authored the best-selling novel of the same name. It was directed by Arthur Hiller and starred Ryan O'Neal, Ali MacGraw, John Marley, Ray Milland and Tommy Lee Jones in his film debut in a minor role. A tragedy, the film is considered one of the most romantic by the American Film Institute and one of the highest grossing films in U.S history. It was followed by a sequel, Oliver's Story, starring O'Neal with Candice Bergen. ... more on Wikipedia

Love Story is ranked on...

Love Story is also found on...