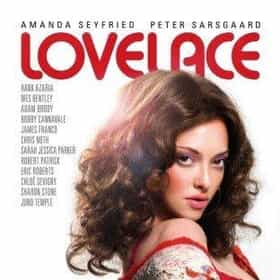 Lovelace is a 2013 American biographical drama film about actress Linda Boreman, better known as Linda Lovelace. It covers the part of her life when she was "20 to 32". Directed by Rob Epstein and Jeffrey Friedman, the film was written by Andy Bellin and stars Amanda Seyfried, Peter Sarsgaard, Sharon Stone, Adam Brody, and Juno Temple. The film had its world premiere on January 22, 2013, at the 2013 Sundance Film Festival and opened in a U.S. limited release on August 9, 2013. ... more on Wikipedia

Lovelace is ranked on...