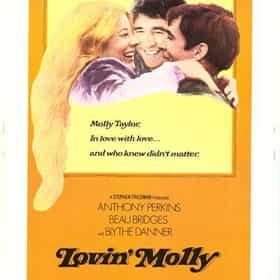 Lovin' Molly is a 1974 drama film directed by Sidney Lumet and starring Anthony Perkins, Beau Bridges, Blythe Danner in the title role, Ed Binns, and Susan Sarandon. The film is based on one of Larry McMurtry's first novels, Leaving Cheyenne. Prior to release, the film was also known as Molly, Gid, and Johnny and The Wild and The Sweet. In an interview with another of the actors in the film, Paul Partain described the origins of the film: When Sidney [Lumet] and producer Stephen J. Friedman got into town, they came with what they hoped would be the perfect formula for success. It had worked on The Last Picture Show, and they knew it would work here. It was this: get a Larry McMurtry ... more on Wikipedia

Lovin' Molly is ranked on...

Lovin' Molly is also found on...