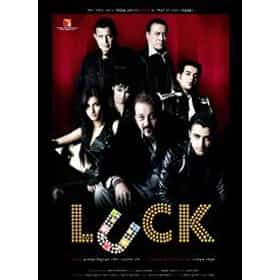 Luck is a 2009 Indian action-thriller film directed and written by Soham Shah, and produced by Shree Ashtavinayak Cine Vision Ltd. The screenplay was adapted from a 2001 Spanish thriller film, Intacto. The leading roles were played by Mithun Chakraborty, debutant Shruti Haasan, Imran Khan and Sanjay Dutt; the other significant parts, and fellow members of the gang were played by Danny Denzongpa, Ravi Kishan and Chitrashi Rawat, prominent actors from the Indian film industry. The camera of the film was handled by Santosh Thundiyil, whilst composer duo Salim-Sulaiman recorded the musical score. The film released to Indian audiences on 24 July 2009 & was critically panned. ... more on Wikipedia

Luck is ranked on...

Luck is also found on...