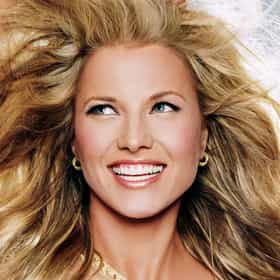 Lucille Frances Lawless, (née Ryan; born 29 March 1968), is a New Zealand actress and singer. She portrayed the title character in television series Xena: Warrior Princess (1995–2001); cylon model Number Three D'Anna Biers on the re-imagined Battlestar Galactica series (2005–2009); and Lucretia in the television series Spartacus: Blood and Sand (2010), its prequel Spartacus: Gods of the Arena (2011), and its sequel Spartacus: Vengeance (2012). Lawless had recurring roles as Diane Lewis-Swanson on the NBC sitcom Parks and Recreation (2012–2015), and as Countess Palatine Ingrid Von Marburg on the WGN America supernatural series Salem (2015). She also starred as Ruby on the Starz ... more on Wikipedia

Lucy Lawless is ranked on...

#91 of 480 Famous Women You'd Want to Have a Beer With 750.6k VOTES If given the opportunity to sit down for a beer with any famous female figure, which famous women would you most want to get...
#93 of 151 The All-Time Greatest Action Stars 289.2k VOTES Who are the all-time greatest action stars? This list includes some of the biggest names in movie history, and each actor or...
#17 of 37 The Most Gorgeous Girls on Primetime TV 1.1M VOTES The most stunning women from current primetime network television. These women found an audience of enthusiastic men af...
#299 of 1,026 The Most Beautiful Women In Hollywood 4.4M VOTES The most beautiful women in the world are a great mix of attractive TV actresses, singers, models, and more, ...
#414 of 1,582 People who voted for Lucy Lawless... People Age 30 to 49 are 2x more likely to vote for this The Most Beautiful Women in the World 5.6M VOTES Naming the most beautiful women in the world is a difficult task because of how subjective it is. Beauty is a mixture of phy...
#46 of 162 Hottest Female Celebrities in Their 40s in 2015 89.4k VOTES Time is tough on all of us, but it’s especially tough on women who make their living - at least partially - on their appeara...
#298 of 514 Celebrities Nobody Cares About Anymore 3.4M VOTES Some of the greatest actors of all time have, in recent days, turned into a bunch of washed-up hacks that would be somehow b...
#54 of 104 People who voted for Lucy Lawless... People outside of the US are 2x more likely to vote for this also upvote Star Trek Franchise on The Best Space Movies The Best Female Celebrity Role Models 57.6k VOTES Who are the top celebrity role models for girls? They're those famous females who encourage girls to be themselves and to st...
#32 of 75 The Greatest Guest Appearances in The Simpsons History 8.1k VOTES With 25+ seasons completed and seemingly no end in sight, there is certainly no shortage on the number of celebrity guest st...
#517 of 3,140 The Most Beautiful Celebrities Of Our Time 6.2M VOTES This list of hot celebrities is ranked by pop culture junkies worldwide, making it the best place to find the most attractiv...
#32 of 38 The Most Stunning Women in Action Movies 326.4k VOTES The beautiful women in action movies manage to command the screen with their physical abilities and their acting skills...
#9 of 163 Beautiful Celebrity Women Aging the Most Gracefully 441.9k VOTES The beautiful celebrity women aging the most gracefully are those gorgeous celebs and actresses in their 50s and 60s whose b...
#91 of 165 If You Fought To The Death, Who Would You Want By Your Side? 70.8k VOTES Fighting to the death. You know you’ve thought about it; pop culture has definitely made you consider it. In the e...
#25 of 31 Awesome Photos Of Celebrities With Their Stunt Doubles 381.9k VOTES Whether or not you're a fan of action movies, you’ve got to admit that there’s something awesome about a great stunt. The ir...
#54 of 421 The Hottest Women Over 40 in 2013 602k VOTES This is an Ultimate List of the hottest women over 40. It's hard to believe that some of these well known women are over 40,...
#279 of 415 Maxim's Nominees for the 2015 Hot 100 191.4k VOTES Here are Maxim's nominees for the 2015 hot 100. This is the issue of Maxim that gentlemen around the world look forward to m...
#9 of 29 All The Insanely Famous People Who Guest Starred On Veronica Mars 446 VOTES When it comes to picking your favorite, there is certainly no shortage of Veronica Mars guest stars to choose from. Dur...
Every Person Who Has Hosted 'Saturday Night Live' 47k VIEWS Live from New York! It's Saturday Night! This is a list of all Saturday Night Live hosts, in reverse order,...
Famous People Who Don't Like Game of Thrones 86.4k VIEWS It seems like just about everyone you know is absolutely obsessed with Game of Thrones. Already six seasons in, the show sti...
28 Famous Divorcées Who Kept Their Ex-Husbands' Names 172.4k VIEWS After a divorce, many women keep their ex-husband's name, especially if they are a known celebrity whose name is part of the...
Relatives Of Celebrities Describe How They Reacted To Their Fame 1.3M VIEWS Celebrities aren’t just born out of the ether and sent into the public eye. They come from families filled with sibling...
100 Film and TV Celebs Who Have Also Starred on Broadway 15.1k VIEWS Film and TV celebs who have also starred on Broadway are those actors and actresses who have seen success both on screen and...
#63 of 151 The Best People Who Hosted SNL In The '90s 1.6k VOTES The 1990s were a period of transition and change for Saturday Night Live, but they carried through and started the new mille...
Famous People Named Lucy & Lucille 23k VIEWS If your name is Lucy, then you're in some great company. Here's our list of the most famous people named Lucy and Lucille, i...
Female Celebrities Who Are 5’9" 11.1k VIEWS This list contains examples of female celebs who are 5'9" loosely ranked by fame and popularity. Standing a full five i...

Lucy Lawless is also found on...