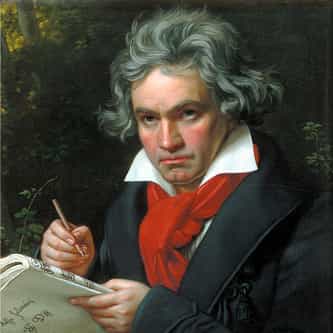 Ludwig van Beethoven ( (listen); German: [ˈluːtvɪç fan ˈbeːthoːfn̩] (listen); baptised 17 December 1770 – 26 March 1827) was a German composer and pianist. A crucial figure in the transition between the classical and romantic eras in classical music, he remains one of the most recognized and influential musicians of this period, and is considered to be one of the greatest composers of all time. Beethoven was born in Bonn, the capital of the Electorate of Cologne, and part of the ... more on Wikipedia

214.1k readers 18 Grim Facts About The Life Of Beethoven You Never Learned As A Kid

Ludwig van Beethoven IS LISTED ON