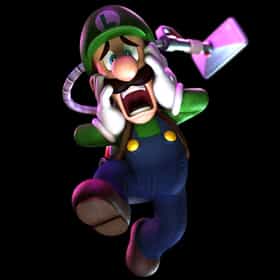 Luigi is a fictional character featured in video games and related media released by Nintendo. Created by prominent game designer Shigeru Miyamoto, Luigi is portrayed as the slightly younger but taller fraternal twin brother of Nintendo's mascot Mario, and appears in many games throughout the Mario franchise, often as a sidekick to his brother. Luigi first appeared in the 1983 arcade game Mario Bros. as the character controlled by the second player, and retained this role in Super Mario Bros., Super Mario Bros. 3, Super Mario World, and other titles. The first game where he was available as a primary character was Super Mario Bros. 2. In more recent appearances, Luigi's role became ... more on Wikipedia

Luigi is ranked on...

#52 of 88 The Best Anime Characters With Blue Eyes 50.7k VOTES We don't often pay attention to it, but who are the best anime characters with blue eyes? For this list we want to rank ever...
#13 of 80 Every 'Smash Ultimate' Character, Ranked 89.1k VOTES Now that every character from Super Smash Bros. Ultimate for Nintendo Switch has been revealed, let's rank them! This i...
#14 of 15 15 Huge Characters Who Should Weigh A Lot More 9.2k VOTES The concept of body image, and particularly the kinds of unrealistic body images often promoted in media, are a major issue ...
#9 of 40 The Best Nintendo 64 Characters 4.1k VOTES While other game systems were moving to discs, Nintendo always found a way to zig when others sag, and the Nintendo 64 kept ...
#13 of 56 People who voted for Luigi... are 4x more likely to vote for Mario on this list are 4x more likely to vote for Pac-Man on this list The Best Super Smash Brothers 4 Characters (Wii U & 3DS), Ranked 30.4k VOTES This is a complete ranking of the best Super Smash Brothers 4 characters (Wii U & 3DS), aka Smash Brothers 4. So far the...
#9 of 31 The Best NES Characters 3.2k VOTES You'll never forget your first, and for many, the Nintendo Entertainment System was their first encounter with console gamin...
#7 of 25 The Greatest Super Mario Characters of All Time 83k VOTES Here is a list of all Super Mario characters to have ever appeared in a Mario game to vote on. In fact, many of these charac...
#3 of 25 The Best Gamecube Characters 2k VOTES Once again, when it came time for all the other consoles to zig, Nintendo chose to zag with the Gamecube. With minidiscs and...
#2 of 22 The Best Wii U Characters 1.3k VOTES No one was quite sure where Nintendo was going to go after taking a hard left turn with the Wii original. Having completely ...
#7 of 111 Notable Secret Video Game Characters 724 VOTES A complete list of the notable secret video game characters worth going after. This is a list of famous secret characters i...
#3 of 31 The Best Jumping Characters in Gaming History 2.3k VOTES One of the more delightful aspects of playing video games is jumping. That may seem silly, but really, you're never going to...
Which Starting Character In 'Super Smash Bros. Ultimate' Are You, Based On Your Zodiac? 1.7k VIEWS Super Smash Bros. Ultimate is the holy grail for every fan of the franchise. Instead of dreaming up which characte...