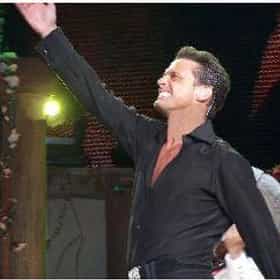 Luis Miguel Gallego Basteri (born 19 April 1970) is a Puerto Rican-born Mexican singer and icon in Latin America, often referred to as El Sol de México (The Sun of Mexico). He is widely regarded by many as the most successful artist in Latin American history, having successfully performed in a wide range of musical styles, including pop, ballads, boleros, tangos, jazz, big band and mariachi. Luis Miguel is also recognized as the only Latin singer of his generation to not crossover to the anglo market during the "Latin Explosion" in the 1990s. Despite singing only in Spanish, he continued to be the best selling Latin artist in the 1990s, and was credited for ... more on Wikipedia

The Best Luis Miguel Albums of All Time 509 votes Luis Miguel is easily one of the best Mexican singers of all time, renown for his music across Latin America. Here, you can ...

Luis Miguel is ranked on...

#802 of 2,187 The Greatest Musical Artists of All Time 13.4M VOTES When VH1 polled fellow artists to name the greatest artists of all time, it seemed like a good idea---but in reality, the li...
#799 of 1,057 The Best Singers of All Time 2.2M VOTES Who are the best singers of all time? That's a tough question to ask. This list includes many of the greatest, most famous v...
#228 of 255 The Best Ballad Bands/Artists 27.6k VOTES Ballad artists list, with photos, ranked best to worst by votes. List of good ballad bands includes a filter so you can sort...
Famous Crooners 269.8k VIEWS List of famous crooners, with photos. Crooning is a 20th century style of singing made possible by the invention of micropho...
Mariah Carey's Loves & Hookups 324.5k VIEWS Who is Mariah Carey dating? Who Mariah Carey dated; list of Mariah Carey loves, ex boyfriends; breakup rumors. The loves, ex...

Luis Miguel is also found on...