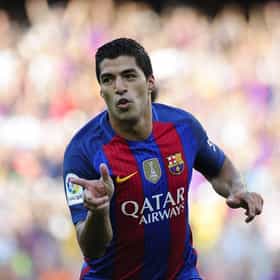 Luis Alberto Suárez Díaz (American Spanish: [ˈlwis ˈswaɾes]; born 24 January 1987) is a Uruguayan professional footballer who plays as a striker for Spanish club Barcelona and the Uruguay national team. Often regarded as one of the best players in the world, Suárez has won 18 trophies in his career, including six league titles and a UEFA Champions League title at club level, and a Copa América with Uruguay. A prolific goalscorer, Suárez has won two European Golden Shoes, an Eredivisie Golden Boot, a Premier League Golden Boot, as well as ending the six-year dominance of Lionel Messi and Cristiano Ronaldo by winning La Liga's Pichichi Trophy in 2016. ... more on Wikipedia

Luis Suárez is ranked on...

#324 of 531 Annoying Celebrities Who Should Just Go Away Already 1.2M VOTES The most annoying celebrities, ranked by entertainment fans themselves. These annoying celebs are obnoxious, overexposed, ...
#51 of 1,397 The Best Soccer Players of All Time 3.6M VOTES Whether you call it soccer or football, this extensive list of the greatest soccer players of all time is ranked by&nbs...
#13 of 138 The Greatest South American Footballers of All Time 57.5k VOTES The Greatest South American Footballers as voted on by footy fans across the world. These are the best South American soccer...
#4 of 546 People who voted for Luis Suárez... also upvote The Godfather Franchise on The Best Movies of All Time also upvote FC Barcelona on The Best Current Soccer (Football) Teams The Best Current Soccer Players 1.7M VOTES The best current soccer players in the world are leading the charge as some of the most iconic stars in the history of ...
#20 of 62 The Most Controversial Athletes in Sports History 14.2k VOTES Sports stars are one part celebrity, one part athlete. Like so many celebrities, some sports stars are prone to scandal. The...
#21 of 262 The Best Soccer Players of 2013 286.6k VOTES Who were the best soccer players of 2013? Some of these top athletes in soccer, like Cristiano Ronaldo, are already listed a...
#41 of 101 Athletes Who Spark the Most Fan Arguments 68.8k VOTES A list of athletes who are passionately loved and hated by sports fans. These divisive, controversial sports stars inspire b...
#13 of 101 The Best FC Barcelona Players Of All Time, Ranked 5.8k VOTES The best players ever to lace up their cleats for Barcelona have been part of a long legacy of tremendous soccer. All the FC...
#5 of 142 The Best Liverpool Players Of All Time 71.7k VOTES Since its inception in 1892, Liverpool FC have been one of the greatest clubs in English football history. In fact, many wil...
Celebrities Who Own Bitcoin 12.6k VIEWS As Bitcoin is a booming industry, it's no surprise many celebrities with disposable income have chosen to invest. Celebritie...

Luis Suárez is also found on...