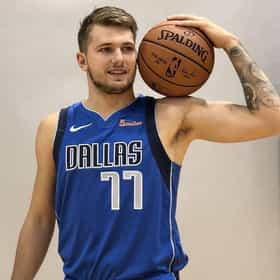 Luka Dončić (born February 28, 1999) is a Slovenian professional basketball player for the Dallas Mavericks of the National Basketball Association (NBA) and the Slovenian national team. Born in Ljubljana as the son of former player Sa-a Dončić, Dončić shone as a youth player for Union Olimpija, before signing with Real Madrid at age 13 in 2012. After debuting in the senior side at age 16, the youngest in club history, he led Madrid to the 2018 EuroLeague title, winning the EuroLeague MVP and EuroLeague Final Four MVP awards at age 19. He was also named the ACB Most Valuable Player, and won back-to-back EuroLeague Rising Star and ACB Best Young Player awards. In 2018, Dončić declared ... more on Wikipedia

Luka Dončić is ranked on...