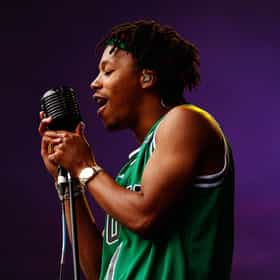 Wasalu Muhammad Jaco (born February 16, 1982), better known by his stage name Lupe Fiasco ( LOO-pay), is an American rapper, record producer, entrepreneur, and activist. He rose to fame in 2006 following the success of his debut album, Lupe Fiasco's Food & Liquor. He also performs as the frontman of rock band Japanese Cartoon under his real name. As an entrepreneur, Fiasco is the chief executive officer of 1st and 15th Entertainment. Raised in Chicago, Jaco developed an interest in hip hop after initially disliking the genre for its use of vulgarity and misogyny. After adopting the name Lupe Fiasco and recording songs in his father's basement, 19-year-old Fiasco joined a group ... more on Wikipedia

Lupe Fiasco is ranked on...

#108 of 498 The Greatest Rappers Of All Time 6.5M VOTES Update: Follow Ranker's official new rap 2020 playlist on Spotify! Finally, a definitive list of the best rappers of ...
#390 of 561 The Most Hipster Bands 178.9k VOTES Since the mid-2000s, the word hipster has invaded the lexicon of pop culture and has become a term, for better or worse, syn...
#9 of 74 The Best Chicago Rappers 132.3k VOTES When you think of Chicago rappers these days, the first person that usually comes to mind is Kanye West. While he is from th...
#135 of 192 The Best Underground Rappers 177.7k VOTES The best underground rappers, which includes a lot of underrated rappers within the underground rap scene. A lot of these ra...
#139 of 188 The Most Respected Rappers, Ranked 41.6k VOTES When it comes to the rap game, it's all about respect. In other words, a rapper's career will only go so far if they aren't ...
#7 of 41 The Very Best Muslim Rappers 8.1k VOTES As long as hip hop has been part of the cultural vernacular, the religion of Islam has had a decidedly profound influence on...
#65 of 114 Rappers with the Best Voices, Ranked 35.8k VOTES When ranking the best rap artists, the rapper's voice is an important factor in determining which hip hop artists stand...
#52 of 75 The Best Political Musicians 17.4k VOTES Music, by it's nature, is inherently political. Musicians have been singing about the ills of society since the origins of f...
#32 of 36 The Greatest On-Stage Celebrity Falls of All Time 2.7k VOTES Oh, how the mighty have fallen. Literally fallen. Like on the stage, off the stage, into the audience; these musicians and p...
#3 of 16 16 Rappers You Didn't Realize Love Anime 5.9k VOTES There's an anime fan inside everyone. Sure, it may seem hard to imagine, but that famous actor you're watching on the big sc...
#23 of 23 The Best Rapper Stage Name Origin Stories 4.3k VOTES Ever wonder why your favorite rappers are called the names that they're called? Clearly, rapper names like Waka Flocka Flame...
#14 of 43 Rappers with the Cleanest Image, Ranked 3.7k VOTES A majority of rappers don't have the cleanest image. Whether that's due to their upbringing or hardships throughout life, ha...
#39 of 57 Who Should Play the Super Bowl Halftime Show? 6.6k VOTES UPDATE: On December 3, 2015, it was announced that Coldplay will perform at the 2016 Super Bowl halftime show. The 2016 Sup...
The Real Names of 150 Rappers 523.5k VIEWS This list of the real names of rappers will inform and enlighten you, because who even knew some of the best rappers in hist...
#55 of 102 The Best Musical Artists From Illinois 6.1k VOTES Here are the best artists and bands from Illinois. Illinois has a vast musical heritage, and much of it centers around Chica...
#54 of 123 The Greatest Rappers Of The 2010s 15.7k VOTES Here are the best rappers of the decade, ranked by fans everywhere. From Kendrick Lamar and Nicki Minaj to Dr...
#16 of 73 The Best Midwestern Rappers 33.4k VOTES Midwest hip hop artists list, with photos, ranked best to worst by votes. List of good midwest rappers includes a filter so ...
#9 of 107 The Best Political Hip Hop Bands/Rappers 10k VOTES By it's explosive nature and origins in cities, hip hop is political. Whether subversive or explicitly described, political ...
#24 of 74 The Best Freestyle Rappers 14.9k VOTES  Freestyle rap artists list, with photos, ranked best to worst by votes. List of good freestyle rap bands includes a fi...
#10 of 86 The Best Conscious Rappers 32.9k VOTES This conscious rappers list ranks the best conscious hip hop artists and groups by votes. This list of good conscious rapp...
#16 of 31 The Best Rappers To Listen To If You Like Kendrick Lamar 2.3k VOTES If you're a fan of Kendrick Lamar, here is a list of rappers who make similar music. Known for his storytelling an...
Celebrities Who Support Palestine 77.4k VIEWS Though it may be surprising, pro-Palestinian celebrities range from longtime activists to musicians to younger stars. All ha...
Anarchist Musicians 19k VIEWS A list of anarchist musicians. The list includes musicians who are self-described anarchists, regardless of whether or not t...

Lupe Fiasco is also found on...