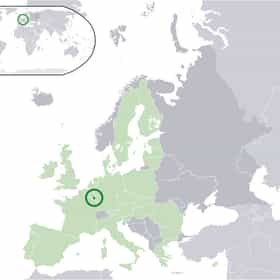 Luxembourg, officially the Grand Duchy of Luxembourg, is a landlocked country in Western Europe. It is bordered by Belgium to the west and north, Germany to the east, and France to the south. It comprises two principal regions: the Oesling in the north as part of the Ardennes massif, and the Gutland in the south. Luxembourg had a population of 524,853 in October 2012 and has an area of 2,586 square kilometres, making it one of the smallest sovereign nations in Europe. As a representative democracy with a constitutional monarch, it is headed by a grand duke, Henri, Grand Duke of Luxembourg, and is the world's only remaining grand duchy. Luxembourg is a developed country, with an ... more on Wikipedia

Luxembourg is ranked on...

Luxembourg is also found on...