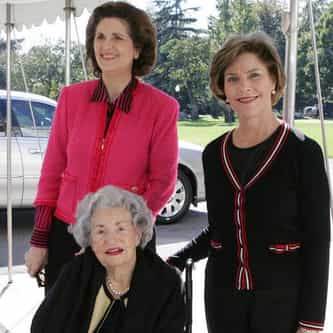 Lynda Bird Johnson Robb (born March 19, 1944) is an American chairwoman who served as chairwoman of the Board of Reading is Fundamental, the nation's largest children's literacy organization, as well as chairwoman of the President's Advisory Committee for Women. She is also a magazine editor who served as First Lady of Virginia from 1982 to 1986, before that as Second Lady of Virginia from 1978 to 1982. She is the elder of the two daughters of former United States President Lyndon Baines ... more on Wikipedia

#12 of 22
33.6k VOTES The Most Beautiful First Daughters in American History, Ranked
15.6k VIEWS Portraits And Photos Of The US First Children
753k VIEWS Here's What The Living Descendants Of US Presidents Look Like
13.4k VIEWS Celebrities Who Were in Zeta Tau Alpha
1k VIEWS Famous Parents And Kids Who Went To The Same College
1.8k VIEWS Famous People Named Lynda
List of Famous Editors Women Who George Hamilton Has Dated Famous Female Editors List of Famous Public Servants