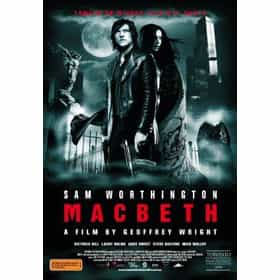 Macbeth is a 2006 Australian adaptation of William Shakespeare's Macbeth. It was directed by Geoffrey Wright and features an ensemble cast including Sam Worthington, Victoria Hill and Lachy Hulme. Macbeth, filmed in Melbourne and Victoria, was released in Australia on 21 September 2006. Wright and Hill wrote the script, which — although it uses a modern-day Melbourne gangster setting, and the actors deliver the dialogue in Australian accents — largely maintains the language of the original play. Macbeth was selected to screen at the Toronto International Film Festival in September 2006. ... more on Wikipedia

Macbeth is ranked on...

Macbeth is also found on...